Last week, the Royal Hospital Chelsea looked more like an HS2 construction site than a centre of horticultural excellence as hundreds of landscape architects and gardeners battled to construct their creations in time for this year’s Chelsea Flower Show, which will be officially opened by the Queen tomorrow.

But amid all the high-vis jackets, steel-capped boots, fork-lift trucks, and cranes there were pockets of peace and oases of calm that were already taking shape.

What caught the eye most, perhaps, was a treehouse, perching above an old stump of chestnut, just off the main avenue of show grounds.

Clad in stag horn oak and nestled in twisted branches of hazel, it looks like a super-sized bird’s nest. It is both impressively sculptural and a place you immediately want to climb into to play hide-and-seek. Under the treehouse a swing, made of a ball of rope, hangs invitingly over undergrowth, thick with ferns and huge leaves of gunnera.

The dream-like treehouse and swing are the centrepiece of the Royal Horticultural Society’s Back To Nature Garden – co-designed by the Duchess of Cambridge.

Landscape architects Adam White and Andree Davies are the two professional co-designers, and they invited The Mail on Sunday for an exclusive preview ahead of the grand opening.

White says that during the planning stages late last year, the Duchess would bring a scrapbook full of pictures, photographs and ideas to every meeting.

Their shared goal: to highlight the link between nature and health, both mental and physical.

A REMEDY FOR NATURE DEFICIT DISORDER

The Duchess, Davies and White had, quite independently, come across a book, Last Child In The Woods, by Richard Louv.

In it, Louv suggests that some of the most troubling childhood trends, such as the rise in obesity, attention disorders and depression, were linked to not spending enough time outdoors.

He even gives the ‘condition’ a name: nature deficit disorder, which reflects the emerging evidence that the health of youngsters in urban areas is far worse than those who grow up in the countryside. 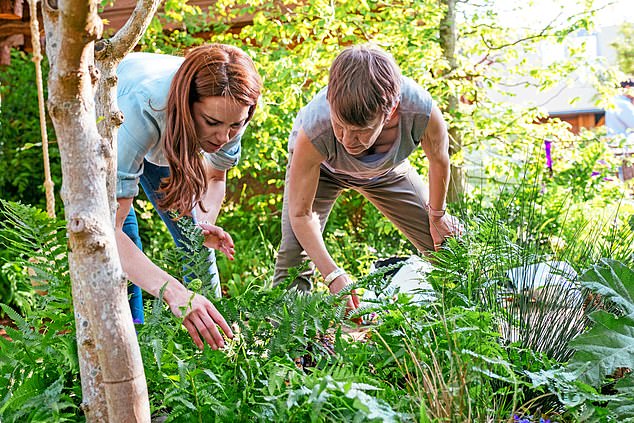 And so the Duchess, mother to Prince George, five, Princess Charlotte, four, and Prince Louis, one, wanted her garden to be a playground for children to escape into – but also a space for grown-ups. She was, say her collaborators, also inspired by forest bathing, the Japanese practice of walking slowly and thoughtfully in woodland – ‘bathing’ in its peace and beauty to recharge the body’s batteries.

This isn’t just a new name for tree-hugging – although, as I discovered later, hugging trees can be part of it.

In fact, studies show that blood pressure, heart rate, mood and even the immune system can all be improved by spending some quiet time in forested areas.

Indeed, in Japan, where rates of heart disease are among the lowest in the world, forest bathing, or shinrin-yoku, is a vital part of their national health programme. 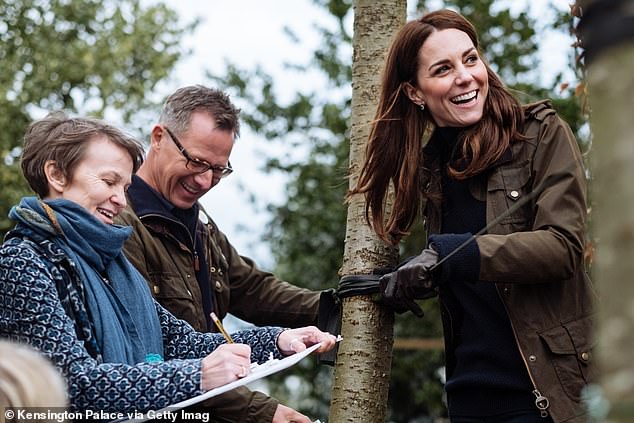 An earlier picture of The Duchess of Cambridge with Andree Davies (C) and Adam White (L), of Davies White Landscape Architect, discussing plans for her ‘Back To Nature’ garden

‘The Duchess suggested this,’ says White. ‘The challenge was to create an immersive experience, for visitors to feel like they are in the middle of a woodland, so that everyone gets their own little nature fix.’ And they have certainly achieved it.

As well as the treehouse and swing, there is a stream where children can play Pooh sticks and a large hollow log – sourced from a fallen tree on the Queen’s country estate at Sandringham in Norfolk – which they can crawl into for a moment of calm.

The garden will feature a wide variety of trees, including what Davies describes as ‘incredible edibles’, such as walnuts, apples and pears as well as Scots pine, the only truly native pine in the UK. ‘The dry cones can be used as kindling for fires, which is ideal if you are out exploring nature, building dens and a campfire,’ she adds.

There’s plenty for adults to admire too, not least the richness of planting and the stunning hornbeam trees that give the garden a jungle-like atmosphere. So can something as simple as a walk among the trees really have a direct impact on your health? 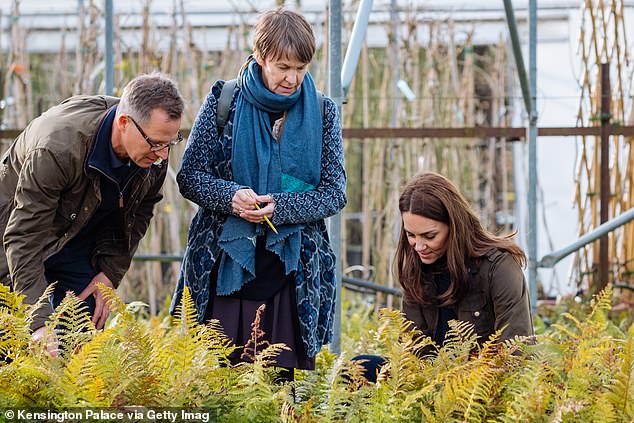 Pictured: Previous image of Kate with Andree Davies (C) and Adam White (L), of Davies White Landscape Architect, discussing plans for her ‘Back To Nature’ garden

Davies says: ‘If you are a stressed office worker, and you spend five or ten minutes of your day walking in nature, slowing down, looking at things in detail and feeling that atmosphere of being out in the woodlands – it brings your heart rate down.’

THE RISE OF THE TREE-HUGGER

The practice of forest bathing has, in recent years, made its way West. Wayward teenage pop star Justin Bieber and lover of all things alternative-health Gwyneth Paltrow were early adopters.

And now the Establishment – not just the Duchess – is embracing it.

Both the Forestry Commission and the RSPB conservation charity offer forest bathing sessions on their land, while health retreats and spas offering versions are popping up all over Britain.

I signed up for a session at Armathwaite Hall, a spa hotel on the shores of Bassenthwaite Lake in North Cumbria.

And so I found myself lying on a carpet of snowdrops – and feeling a bit of a wally, to be honest – as my instructor, yoga teacher Rebecca Shepherd, instructed me to ‘take a breath in and whisper the word ‘ham’ ‘. When I shot her a quizzical look, wondering whether the rasping noise I am making is correct, she says: ‘Yes, that’s right. It’s like Darth Vader.’ She explains: ‘The whole thing with forest bathing is that you go into woodland and you shut up.

The oasis that fights stress in city-dwellers 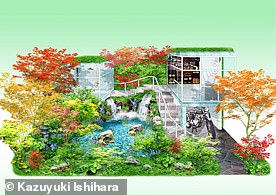 Living in the urban sprawl can be stressful.

The Green Switch garden, designed by Kazuyuki Ishihara, who has created 13 previous gardens for Chelsea, aims to help city-dwellers escape to an oasis of calm.

Here people can switch from city chaos to a natural calm, thanks to the open-style Azumaya (garden house).

The two-storey glass structure has an upper tea room, a lower parking space (with motorbike parked), and a glass shower room for outdoor bathing, surrounded by trees.

A family-friendly space to heal emotions 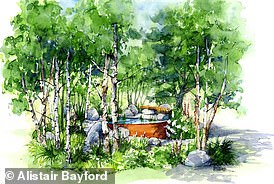 The Family Monsters Garden celebrates imperfections in life, showing that from adversity, great things can grow.

A joint venture between the charity Family Action, which supports families experiencing social isolation, and landscape architect Alistair Bayford, the garden of birch, hazel and black pine trees is a place where families can open up about anxieties.

Alistair says: ‘The trees illustrate the journey of growth – and how families grow and recover from knock-backs.’ 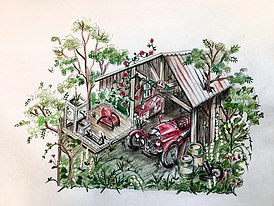 The ‘High Maintenance Garden’ for sufferers of the degenerative brain disease motor neurone disease serves as an inspirational metaphor.

It represents the limitations people feel when their mind and senses are still active but their body is in physical decline.

So while they can enjoy the garden’s sensory elements, the untended garden gradually slips back to nature, overtaken by roses and jasmine and with trees climbing through the roof. 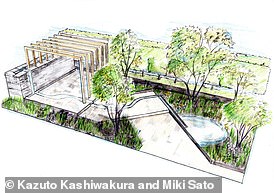 The Kampo no Niha garden takes its inspiration from Kampo, a traditional form of Japanese herbal medicine dating back to the 7th Century.

The plants in the garden grow in the Hokkaido region and are all used in Kampo medicines.

The buds of the Magnolia Kobus help reduce fever and the roots of the Paeonia lactiflora can relieve headaches.

‘You absorb the colour green, you listen to the birdsong, you smell the natural scents and you take in nature – which is astounding.

‘Rather than staring at our phones or a computer screen, you actually have a look around.’

I spend some time examining the moss on a fallen branch, to see how many different shades of green it contains, its texture, and how it feels beneath my fingers.

Once I stopped thinking about the fact that I was stroking a tree branch, I was indeed overcome with a sense of calm.

The key, I’ve discovered, is not to take yourself too seriously. If you can master that, it really does work.

TREES CAN BOOST IMMUNE HEALTH… AND THE HEART

Research from Nippon Medical School in Tokyo suggests that forest bathing could have a direct effect on the immune system, specifically our natural killer, or NK cells, which protect us from viruses and the formation of tumours.

Patients saw a significant boost to their NK cell activity in the week following a forest visit, with positive effects lasting a month after.

A separate study, by experts at Japan’s Chiba University, measured levels of the stress hormone cortisol, blood pressure and heart rate in volunteers during a day spent in the city, repeating the tests during a 30-minute forest visit.

All health measures improved during the time spent among the trees. But why?

He says: ‘Our systems are attuned more to the natural world we evolved in than the bleeps, clicks and lights of modern-day living.’

In short, he says, it comes down to evolution. We have spent only a couple of centuries living in built-up environments surrounded by brick, glass and tarmac, yet spent many millennia among the trees.

Another fascinating theory involves organic compounds called phytoncides. Trees emit them into the air to help protect themselves from parasites and disease. There is evidence that phytoncides really could benefit humans.

Experts at the University of Helsinki revealed that the rapid increase in allergies, asthma and other chronic inflammatory disorders in the past few decades has been caused by the death of plants and loss of animal life. This reduces human exposure to beneficial microbes that are essential for a healthy immune system.

They also found allergies in youngsters were significantly reduced if they lived near greenery.

A GENTLE WAY TO EASE TRAUMA

It is not just physical health that forest bathing can boost but mental health too – and the NHS is increasingly interested in the link between nature and mental health.

Psychiatrist Tim Kendal, the NHS’s National Clinical Director for Mental Health, says: ‘There is a growing body of evidence of the benefit of being in a natural environment, be it a sculptured version of nature or a more wild version.’

After the Chelsea Flower Show, much of the Back To Nature garden will be uprooted and replanted at an NHS Mental Health Trust, where it is hoped patients will enjoy the benefits of the trees.

Andrew Kingston is recovery service manager for Camden & Islington NHS, and his psychiatric hospital was the recipient of last year’s Chelsea garden after the show. Many of his patients are elderly, with conditions including schizophrenia and bipolar affective disorder. He says: ‘Tending to the garden gives them a focus. There’s no doubt most people who forest-bathe feel it boosts their health.’

Caro, 69, a retired teacher, once a month joins a forest bathing group in Highgate Woods, North London. Caro told me she started coming to the group after her home was burgled last year and a man stole some of her jewellery.

She says: ‘I was traumatised. But coming to this was just so calming. I just thought, well – these are jewels, these things in nature. That feeling of trauma just ebbed away.’

She describes the sessions as ‘magical’ – a word Prof Richardson uses too, when describing a Japanese study from 2017 which suggests just stroking a bit of wood could lower your blood pressure.

‘It’s science, not magic. But it feels magical, doesn’t it?’

It certainly does. The Duchess of Cambridge’s father-in-law, the Prince of Wales, was once mocked for being a tree-hugger.

But, it turns out, if we all spent a bit more time hugging trees, we would be healthier and happier.